Meg Samuelson and I collaborated on an interdisciplinary project that considered the contemporary politics, shifting poetics and invoked pasts in the film Otelo Burning (2011), an isiZulu language film that uses surfing to pose questions about personal and political freedom during the demise of apartheid (1988-1990).

An outcome of the project was the publication of several essays and an interview with Sara Blecher (producer, director) and Sihle Xaba (actor, surfer) in the Contemporary Conversations section of the Journal of African Cultural Studies, Volume 26, Number 3, September 2014.

Meg Samuelson and Glen Thompson, “Introduction.” (Free Access to the article, which includes audio-visual supplementary material relating to the film and its reception).

Meg Samuelson, “Re-telling freedom in Otelo Burning: the beach, surf noir, and Bildung at the Lamontville pool.” (Free Access to the article).

David Johnson, “Beyond tragedy: Otelo Burning and the limits of post-apartheid nationalism.”

Meg Samuelson and Glen Thompson, “Interview with Sara Blecher and Sihle Xaba: the making and meanings of Otelo Burning.” 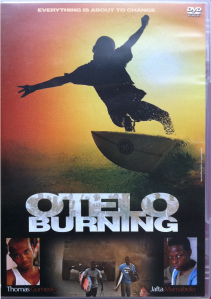 I presenting a paper on how black surfers have been represented in South Africa’s surfing print magazines since 1990 at the Work/Force: South African Masculinities in the Media Conference  held at Stellenbosch University on 13th & 14th September 2012.

Summary of the paper
The idea of the “surfer boy” in the South African surfing imaginary is no longer primarily white, male and youthful although Zigzag (since 1976) and thebombsurf (since 2008) surf magazines continue to maintain that white, heterosexual hegemony within their textual and visual representations supported by surf industry advertising expenditure. Nor is surfing nostalgically looking back to the halcyon days of the Californian inspired Sixties and Seventies. Rather, through grassroots initiatives, surfing development programmes linked to organised surfing, and pressure from the national sport ministry, that same surf media and several surf movies are constructing the idea of surfing in Mzansi (the South) at established and emergent surfing centres along the South African coastline, such as at Durban, Mzumbe, Port St Johns Jeffreys Bay and Muizenberg, where black male surfers and white girl surfers are visible. In many ways it is the new possibility of these postcolonial surfing sites that have provided the greatest challenge to the historically white and male South African surfing imaginary and opens up possibilities for new male identities and gender relations on the post-apartheid beach and, through sporting and recreational practices, in the surf. This does not mean that the surf media is not without producing social tensions in what is said and not said (and what is seen and unseen) about race and gender. The former surfaces as race trouble in negotiating new identities that attempt to masked social fractures within surf culture. The latter shows fissures in the production of a white South African surfing masculinity historically used to supporting its dominance in society through a sporting practice. In these ways, the South African surf media provides a useful lens to critically explore competing masculinities within a marginal aquatic sporting tradition that point to social transformations on the beach in the years after apartheid.

For more information on the conference: Work/Force: South African Masculinities in the Media Conference.

This paper is part of my ongoing work for my doctoral studies focusing on gender and politics in the history of South African surfing culture.